[TRACK-BY-TRACK REVIEW] Indie-rockers At Pavillon release debut album, ‘Believe Us’, and you want to, because it’s fire

Austrian indie-rock group, At Pavillon, have been on our radars for a while now. The singles they’ve been releasing so far have been received with critical acclaim from both fans and critics alike, but the day has finally arrived where they’ve released their debut album. Believe Us (released via LasVegas Records) is almost exactly what we expected, with a few (good and bad) surprises.

At Pavillon have played at Austria’s biggest music festival, FM4 Frequency where they shared the stage with Gorillaz, Imagine Dragons, Bastille, Kygo, Macklemore, Die Antwoord and The Kooks and at Reeperbahn Festival with the likes of Muse, Jungle, Parcels and Sigrid. They’ve also been fortunate enough to play support for Bombay Bicycle Club, Kakkmaddafakka and Lany.

We took an in-depth listen to Believe Us and penned down some thoughts on At Pavillon’s debut album:

Listen to At Pavillon’s debut album below:

Getting into At Pavillon’s debut album, I expected it to be fun, indie-rock with a political message. I expected to jump around and have a lot of fun. This was not always the case. Keep in mind, this is not a criticism. ‘Believe Us’ is a fantastic album, consisting of incredible musicianship, powerful vocals and is an all-round stellar production. However, even on my first listen-through, the tracks feel as though they all bleed into each other. It’s hard to distinguish the tracks from each other, as they all follow a similar structure. But as I mentioned earlier, even though they all sound similar, they still sound good. The vocal work is phenomenal, the bass hypnotizing, the guitar melodies are beautiful and the drums are the basis of every track; and it’s a strong foundation.

See below for our track by track review of ‘Believe Us’:

1. Believers
An explosive fun track that sets the tone for the whole album. It’s clear this song was intended to be a hit single, as it’s one of the best on the album. Fun, jumping, in your face; this is how you kick off an album.

2. OPOV
A slower track than the first, ‘OPOV’ exudes a sense of melancholy. One thing that is undeniable about this track, is the absolute stunning ear-worm-inducing bassline that carries the track.

3. Lions
The first track I ever heard from At Pavillon, and honestly it might still be one of their best. Fun, explosive, bouncy, funky; ‘Lions’ has it all as you’ll find yourself listening to this jam a couple of times.

4. Face It
The first song I was let down by. This is in no means an intrinsically bad track, I simply felt like it was ‘boring’ for lack of a better word. Not bad, just meh. It feels and sounds like most of the other tracks on the album without actually improving upon anything or adding something new. Everything this song does, the other tracks on ‘Believe Us’ does better.

5. Disco Demolition Night
The first track on the album that feels like At Pavillon were experimenting with their sound a bit. ‘Disco Demolition Night’ has an undeniably funky badass quality. The fun the vocalist has with his voice, is entrancing and adds a whole new layer to At Pavillon. It features guitar picking which made me long for Foals, as the track sounds like the perfect marriage between indie, funk and disco.

6. Cindy
A sexy slower track that I felt from the first listen. The understated guitar picking completely steals the spotlight as the intricate chords run amok in the background, providing the track with everything it needs.

7. Ketamine
A great indie track, with a fantastic bassline (I feel like I say that about each track?). This inspiring track is a definite highlight on ‘Believe Us’. As soon as the electronic synth bass hits in, it left me wanting more. At Pavillon, incorporate more of what you did on this track on your future releases.

8. Mama
This. Probably the only song on the album that sounds audibly different than anything else from At Pavillon. Stunning slower track that features the most beautiful lead guitar you will find on the whole album. My only issue with ‘Mama’, is that the guitar’s melody completely steals the show as the vocal melody is lacking. Nothing wrong with the vocal talent, on the contrary.

9. Stop This War
One of the first singles to be released from this album. It’s easy to see why they would choose to lead the album with this. It’s a fun loving track, although I’m hard-pressed to see if this song will stand the test of time if At Pavillon manages to stick around for the next coupe of years (which I hope they do).

10. All Eyes On You
When At Pavillon sat down to write this track, I feel like someone in the room said “hey, we need a song that everyone can sing along to!”. And it worked. An incredibly fun track, each element of the band shines on ‘All Eyes On You’ as each instrument gets its own little time to shine. The hook is so catchy that it will pop into you brain hours after listening to it. The bass guitar on this track is absolute fire and the bass solo will leave you feeling dirty afterward in all the best of ways. If none of this convinces you on this track’s magic, the guitar riffs towards the very end are some of the sexiest riffs you will hear on this whole album.

Yet the track feels like it’s yearning for more. You feel it building in the background. Something is coming. An absolutely beautiful track, as the harmonisation of the guitar chords completely mesmerises you.

Halfway into the track, it all changes. At first I thought it was a secret track on the album, but no, it’s still ‘Vienna’. The track turns positive. It explodes with big vocals, massive guitars, epic solos, banging drums; ‘Vienna’ is the standout on ‘Believe Us’. A true ‘lighters in the air’ track, ‘Vienna’ is a perfect closing track for what was all in all a great experience from At Pavillon. 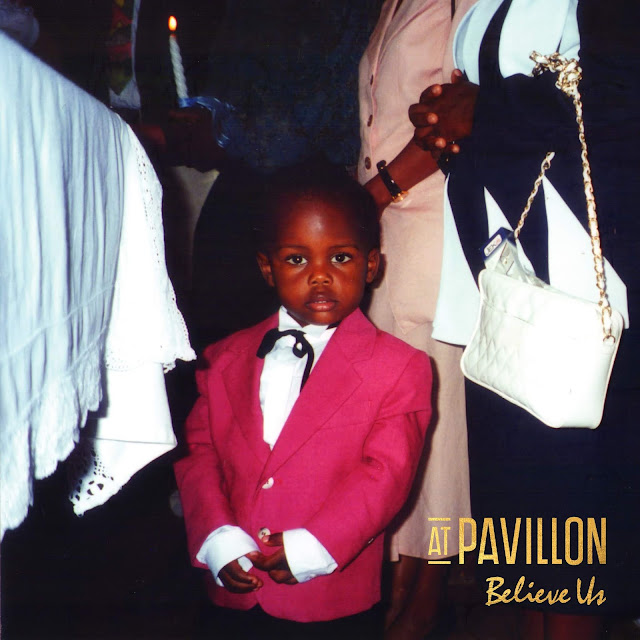 At Pavillon’s debut album is a great introduction to the worldwide community.At certain points I was left wanting more, but when it delivered it brought the house down.