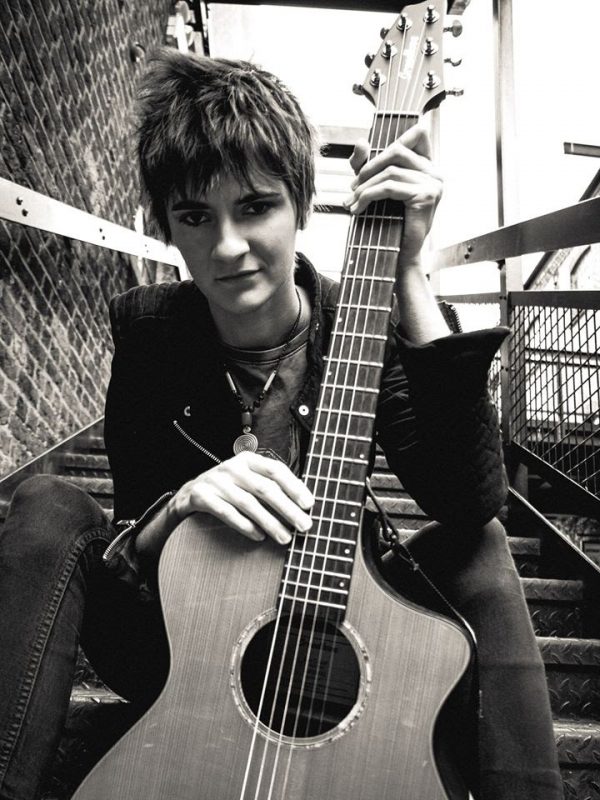 Camden, London-based rocker Georgia Maria has performed at Latitude Festival, Standon Calling Festival and at renowned London venues including the Hope & Anchor, the Fiddler’s Elbow, the Dublin Castle and the Bedford, and has opened for progressive rock band The Room at Jagz Ascot as well as cult folk singer-songwriter Beans On Toast at Pryzm Kingston.

I got my start in music pretty abruptly: I got a guitar for my 15th birthday, messed around on it for an hour or so, and thought to myself; “Well, looks like this is it for you from now on – you found it!”. I was onstage with a band playing my first (terrible!) guitar solo within a couple of months, and promptly started telling all the school careers advisors that I planned to be a rockstar. I’m not sure I’ve grown up since 🙂

My earliest influences were all the ’70s and ’80s punk bands, which is where my fast-strumming approach came from as I would try to mimic the drum fills on those records; a little later my tastes naturally branched out in all directions, so within my original music nowadays there’s all sorts in the mix in terms of influences: everything from PJ Harvey to Leonard Cohen to Tool! Sounds like an unlikely combination on paper… but I think you’ll hear it.

My songwriting process is super unconventional, mostly owing to me being a bit of a nerd! I know that the way I write differs quite a lot from the way that my musician friends write their songs. For one, everything comes from the lyric in my writing process rather than the other way around; I’ll write a full plot around a character or theme and make sure everything about the lyric is as I want it, before I even start to compose the music for it. I’m very analytical in the way I approach creativity, and I like to have full control over how I communicate my ideas, so I never cowrite or just “jam out” a song – it’s all very methodical and painstakingly put together, note-by-note at times. Musically, I’ll always try to set each of my songs apart from one another by putting unusual combinations of meter, tempo and mode together, such as writing a melody in harmonic minor over an uptempo 6/8 backing, for instance. I’m a sucker for key changes and edgy notes in unexpected places!

Keeping the wheels turning regularly. I’m always at risk of being dictated to by my moods, in terms of when I will and won’t create, but it’s something I’m gradually getting a handle on. If you write regularly as a natural habit, there isn’t any ice there to break and it comes easily.

Nobody knows what they’re doing! At least when it comes to advancing an artist’s career. No industry is without self-styled “experts” of course, but in the music business it really does seem like everybody’s shooting in the dark. The only thing those in the business arm of the music industry seem to agree on is that we artists are all naïve and easily exploitable. I’d like to see more value placed on integrity among those with power over their artists’ futures – it’s not nice to see the talented, deserving people around you growing jaded and cynical the longer they spend in the music scene.

All different sides of the same (apparently three-sided?) coin – fortunately I very much enjoy all of them! I would say though that playing live was my first love and it’s something I can never get enough of. I played 172 gigs last year, partly to combat performance anxiety and partly to get my songs in front of as many new faces as possible… but deep down it was really performing for the sake of performing, and for the thrill of it. It’s the gift that keeps on giving as no two nights are ever the same.

“I want to have your babies!” – one excited gentleman in the audience at Standon Calling Festival 2016.

My current repeat offenders include Elliott Smith, Halestorm, Nothing More, Larkin Poe… and Skindred! I don’t think my Skindred craze will ever end. It’s glorious.

We’re all in lockdown at the time of writing, so the future’s uncertain but I do know for sure that I’ll be shooting some home videos and getting my old YouTube channel up and running again. I used to record covers of guitar solos as a teenager and it seemed to give people a lot of enjoyment (there were some interesting/questionable moves floating around back then…), so it seems like a fitting time to do likewise now that most of us have time on our hands. After that, I’ll be releasing the remaining three songs of my debut EP in succession as singles, then once we’re able to get together again I’ll celebrate with a big EP launch party.

Nothing fame-worthy comes to mind but feel free to take a listen to my new singles, Musketeers and Red-Handed Man. The latter was released recently on Easter Sunday – it’s a murder ballad with guitar solos. Hopefully you’re already sold and I need say no more 🙂