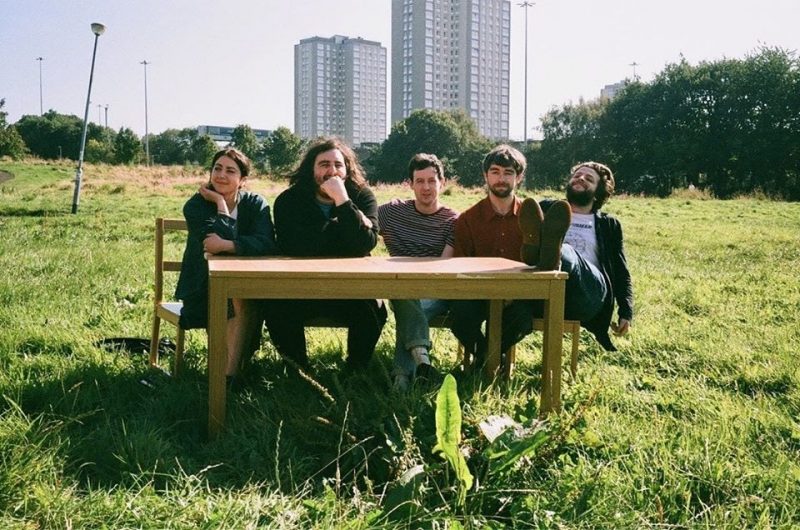 Home$lice is a Glasglow based band comprised of guitarist Scott Whitehill, bassist Scott Reid and Drummer Joseph Cardle. The outfit have just released their latest single, ‘Let Me Know’ which is a true experience to listen to. The lyrics are split between two vocals, which open solemnly with guitarist Alex Porteous lamenting the departure of a familiar presence to a pulsing synth. Lead singer Josh McDowall then takes over in the second verse, describing some of the similar behaviours and emotions experienced when dealing with loss. As the song breathes, the vocals intertwine, with both detailing different sides of the same, sad, shared coin.

Curious about the band who created such an emotive song, we sat down for an exclusive interview with them

Looking back, what were some of your earliest entries into music appreciation? And music production?
Putting on a strobe light and listening to Elvis with my mate when I was 6.

Take us through your songwriting process. Are there any particular steps you take when putting music together?
For the last year or so we have been hauled up in the studio writing. Usually, it starts from a riff from a guitar or chord progression. We work well as a 5 piece. Everyone is heavily involved in the process. For “Let Me Know” we basically spent an afternoon jamming and the main riff came out of Alex’s guitar. Everything was built around that. We are trying a few different sounds so we are leading with those right now to try and break new ground for ourselves.

What gets your creative juices flowing?
Neil Diamond and Silk Cut.

As a musician, it becomes apparent that there is a huge difference between the art and the business. Is there anything about the music scene that you would personally change?
Probably just get the business folk and arty folk together at a summit/all day gig and just hash it out. Nothing a good discussion can’t solve.

Studio work and music creation or performing and interacting with a live audience, which do you prefer?
Neither. We prefer DJ sets.

What is the most memorable response you have had to your music?
Being told we will never be as big as Teenage Fanclub by one of the guys who used to play drums for Teenage Fanclub.

Image credit: Mario Simic Eau Rouge’s latest single ‘I Know That You Know’ touches underneath the facade of a relationship ...

Following the release of the first two singles: ‘Coat of Arms’ (accompanied by stunning stop motion animation video by award ...

Hailed by Alternative Press as the “...glorious love child of Joan Jett & Kurt Cobain,” theWorst has been on a ...